The Congregation of the Worker Sisters of the Immaculate Conception, usually named “Conceptionists”, was born from a divine inspiration generously accepted by Francesco Antonio Marcucci in September 1738 and realised, as he writes “after many prayers, pains and hard works, in the town of Ascoli Piceno on the 8th of December 1744, on the day dedicated to our Immaculate Lady”.
The bishop, Mons. Tommaso Marana, who appreciated the talents and the spirit of the young Francesco Antonio, gave the permission for the foundation and the total trust on the government of it. 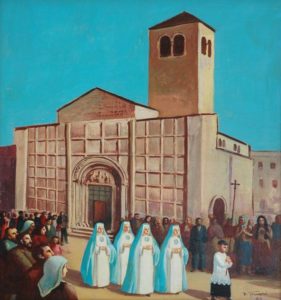 The community life of the first four sisters, Maria Tecla Relucenti, Maria Giacoma Aloisi, Maria Dionisia Paci and Maria Caterina Silvestri, started in poverty.
No one of them had brought the dowry and Marcucci could not dispose of his family properties. Marcucci knew the administrative models of the historical period and with the help of his father, the lawyer Leopoldo, made a surprising  lending and purchases movement, so that he could constitute a fund for the Congregation and in a few years he gave it all the structures it needed for the community life, for the apostolic activity and for the decorum of the Church.
Marcucci cured in a particular way the human and spiritual formation of the members of his Congregation, with real humility, total devotion and faith in God and in His Immaculate Mother.
To attend this big work, during the first three years of the Foundation, he renounced to all the pastoral and preaching obligations, even if they could give a contribution to give  economical support to the Congregation making people know it.
On the 30th of September 1747 he opened in the Monastery the Academy of Immaculate Conception, structured as a small university: together with the religious women, also lay women could attend  the courses, if they were disposed to follow the program of study and the finality of the Academy, which was oriented to the cultural and spiritual formation of the members, on the examples of the virtuous women of the past, and to believe and defend the mystery of the Immaculate Conception of Mary.
The Academy reached quickly the purpose of the Founder: also the worker sisters, who were dedicated to attend the manual works, were introduced to study and lecture, overcoming the typical strong social class discriminations of that historical period.
Three months after the foundation, on the 6th of March 1745, was opened the “Sacred School of Doctrine and Works” for the poor and rich girls of the town.
The first students received in the school were 24, twelve for each one of the two teachers ready to start, even if the girls asking to enter in the school were many more.
On the 14th of  March 1745 Mother Tecla started with the first catechistic lesson to the young women, which gave amazement and wonder, as reported on the “Memories of the Congregation”: “It seemed a new and almost prodigious thing to listen to religious women who were teaching and explaining the Christian Doctrine, and urge strongly everybody to understand.”
In the 29th of May 1749, the Founder opened the School for Intellectual and Practical Education of young women and prepared for it an accurate program.
The School became a catechistic centre not only directed to the students but also to the women of every age and social class and condition.
On 1758 was started the 10 days preparation to help small groups of young girls who were going to receive the Eucharistic Sacrament. From the apposite registration book it is possible to see the number of girls who attended this particular lessons during the period that goes from 1758 to 1770 as reported:
1758: 2 – 1759: 3 – 1760: 2 – 1761: 3 – 1762: 3 – 1763: 3 – 1764: 1 – 1765: 3 – 1766: 4 – 1767: 7 – 1768: 8 – 1769: 5 –  1770: 5.
The method proposed by Marcucci for the education of the young girls is an indefatigable research to find the best way to help the students to understand and grow in a climate of joy, serenity and love.
To a teacher he judged too severe in the method of teaching he recommended: “The teacher must try to go over one thousand ways, give one thousand stimulus, use one thousand words, think one thousand means, and using a clear and various communicative adapt, choose, repeat and use every way to give an impression even to stones”.
Some years later from Rome he wrote to Sister Maria Emanuela Capozi: “The tender plaints must be cultivated with a gentle, patient and pleasant hand. The hard hands break them and loose time. The spirit of the Congregations is founded on the sweet charity. The persons who think differently don’t understand the right sense. It is better to be a girl with the girls to take them to God and make their spirit happy and docile.”
The school founded from Marcucci was the first female school opened in Ascoli for girls and women from every social class and  age. It was an opportunity for women to have a cultural and spiritual elevation to bear positively upon society to heal it and make it get better with the inspiration of the Immaculate Virgin Mary and her powerful intercession.
It is easy to understand how many objections, envies and jealousies this project made and in the same time the consolation and  enthusiastic reaction was coming from this high proposal.
The Institute created by Marcucci was positively inserted in the social and religious tissue of the town growing with the patient work of the founder. and the generous correspondence of the Worker Sisters who were appreciated for the example given from their life and the great social service always more qualified they offered.

THE CONGREGATION AFTER THE DEATH OF THE FOUNDER

When Marcucci died, in 1798, the Congregation counted fifteen members with ten Sisters; during his life twelve Sisters had died.
When in the 15th of June 1801 the Cardinal Archetti, bishop of Ascoli, came back after the Napoleonic tempest, he visited the Monastery and he was pleased for its good progress and for the optimal plan given from the Founder.
But a very hard moment was coming to start for the Congregation. In fact on the 18th of September 1810 the French government started the suppression of the religious congregations. The French government ordered to religious people to leave the religious dress, inside and outside the monastery. The Worker Sisters, guided by the Superior Mother Maria Santina Antonini, obeyed with spirit of faith and they dressed the secular dress leaving the religious dress under it.
On the 31st of October 1811 all the religious of the town were forced to leave the monasteries where they lived, except the ones of the School founded by Marcucci where the young women coming from the closed monasteries were received.
Four years later also the Worker Sisters were forced to leave their residence to give it to the Napoleonic army which stayed in the Monastery.